Does Ashkenazy have an inside track at the Plaza? 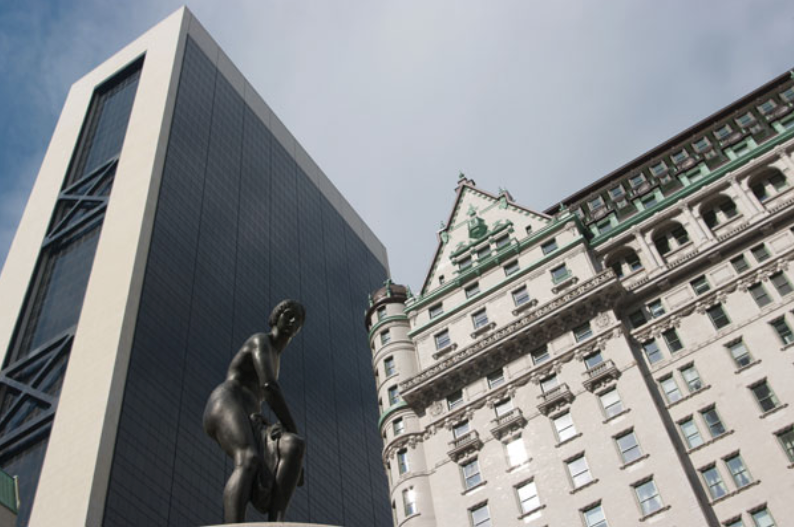 After decades of buying and holding real estate in the five boroughs, Ben Ashkenazy scored an industry coup a few months ago when he bought a minority stake in the Plaza Hotel — in what was by far his splashiest New York purchase ever.

But now, just six months after that fateful purchase, the famed property is in flux again. And this time, Ashkenazy’s namesake firm, Ashkenazy Acquisition Corporation, is positioned to play a significant role in determining what happens to it next.

Shortly after the firm bought its stake — which sources have pegged at north of $70 million — the embattled majority owner, Sahara India Pariwar, put its piece of the hotel on the market. That move has suddenly opened the door to a slew of new possibilities for a property that’s been flirting with distress and has floundered for the last few years, despite its prominent stature and prime address at the foot of Central Park.

Sources say there are three potential outcomes if the property’s 75 percent majority stake sells: Ashkenazy could get bought out and walk away, it could team up with a new partner and redevelop the hotel — or it could take over the whole property in what would undoubtedly be a legacy-defining move. In other words, the fate of one of the most iconic properties in the city is very much up in the air.

“There’s a lot on the table with this transaction,” said Sean Hennessey, CEO of hotel consulting firm Lodging Advisors.

The first round of bidding on Sahara’s stake reportedly kicked off in late October, and at least 50 suitors have lined up for tours. Once sold, the Plaza is likely to see a major revamp, largely because the interested investors have been a mix of global real estate and private equity firms. Whichever one of them gets its hands on it is likely to do a lot more with it then its current owners, who’ve been sitting idly on it.

“Sahara hasn’t had the opportunity to strategically plan and invest to the degree that an asset like the Plaza really demands,” Hennessey said.

Sources say that if Ashkenazy — which has $12 billion worth of assets in North America and the United Kingdom — does take control of the hotel, it’s likely to pour cash into the property to overhaul the gold and marble lobby, along with the retail and the building’s historic façade. In addition, the hotel’s famed Oak Room and Oak Room Bar, which have been shuttered since 2011, could finally see the light of day again.

Ashkenazy has a unique advantage: the right of first refusal, which allows it to review the winning bid and best it. That fact alone is expected to deter many from even bidding.

“It’s a much better position to have the last look at it than to overpay,” said Jeff Davis, the head of JLL’s New York hospitality division, who is marketing the majority stake.

Still, Bradley Burwell, of CBRE’s hotel group, said it’s not the bidders who shy away that pose a threat. “You care about those who will bid more than anyone in their right mind.” he said.

All of this Plaza drama comes while New York’s hotel investment sales market is beginning to regain momentum, but also while very few hotels are trading at a significant profit.

Those market dynamics could give Ashkenazy even more of an advantage given Sahara India Pariwar’s financial woes, which might compel it to sell for a lower price than it otherwise would. (Company founder and Chairman Subrata Roy has been in and out of prison since 2014 for allegedly defrauding his investors, and the firm has been unloading assets worldwide to repay its debts.)

Yet with global real estate players in the mix, anything is possible on price. In addition, sources said a seller, in this case Sahara, would likely incentivize bidding by offering a “beauty prize” in the ballpark of $1 million to the runner-up to help pay for the cost of preparing an offer.

And as history has shown, investors have not always been financially prudent when buying the Plaza. Whether they’ve overpaid or not, many have been won over by the stature of the property or simply been eyeing it for years, including Ben Ashkenazy.

“He lives on Fifth Avenue, a little further up,” said David Kriss, the investor’s longtime lawyer. “He passes it every day, and he had been trying to buy it forever.”

The Plaza: A brief history

But it wasn’t until 2008, four years after the Elad Group bought it for $675 million, that the property saw its first major overhaul in years. That’s when it was converted from an 805-room hotel into 181 condos, 131 hotel rooms and 150 privately condo-hotel units.

When Sahara bought its stake in 2012, the purchase valued the hotel at $575 million.

But since the firm stepped in — and brought Roy’s alleged criminal record with it — the property has been on shaky ground. Shortly after the Indian firm hired JLL’s Davis to market its stake, the Wall Street Journal reported the hotel’s value at a substantially lower $560 million.

Just last year, the billionaire Reuben brothers — who bought the debt on the property after Sahara defaulted in 2014 — scheduled a foreclosure auction, canceling it only after working out a debt extension.

Then Ashkenazy, which was reportedly looking at the Plaza for several years, stepped in and took a controlling interest in Saudi Prince Al-Waleed Bin Talal’s 25 percent stake.

Since launching his firm in 1987, Ashkenazy, whose net worth has been estimated at $4.1 billion, has amassed over 100 buildings.

Along with Michael Alpert, who he grew up with on Long Island and who joined as his partner at the firm in 2002, he’s accumulated an enviable New York portfolio, which includes some of the most valuable retail on Madison Avenue as well as a mix of hotels, offices and rental properties.

Other than the Plaza, the firm has been relatively quiet in New York lately as it’s aggressively pushed into other markets. The company is reportedly planning $2.3 billion worth of acquisitions of global trophy assets over the next two years, with its sights set on the U.K., Italy, France, Spain and Germany.

Both Ashkenazy and Alpert declined to be interviewed, but Alpert made it clear that the company is on the prowl.

“We’re definitely in buy mode right now, hungry for iconic as well as large assets across all product types and in major markets,” said Alpert, who declined to comment further.

The firm already has a deal with Sahara under its belt. In July, it closed on the Grosvenor House hotel in London, which it bought from the firm for $750 million.

That relationship with Sahara could give Ashkenazy another leg up in buying the company’s majority stake at the Plaza, sources said.

Ashkenazy was recently referred to by Bloomberg as a “shy billionaire.” While he can easily count his equity partners on one hand and is press-averse, his real estate purchases suggest that he may want more of the limelight than he lets on.

And his life includes the trappings of any devout billionaire. According to Kriss, he takes a “working vacation” for much of the summer on his yacht in Europe.

But his hustle started at an early age.

Born in Israel, he moved to Long Island when he was 10 and closed his first deal — a $2 million loanbacked purchase of the land beneath a Bronx shopping center — when he was 17. At the time, his father, Izzy, who got his start in the denim and furniture businesses, was a prominent real estate investor.

The firm quietly chipped away at bigger retail plays in the city until 2001, when it shocked the industry and bought the Barneys building at 660 Madison Avenue for $175 million. It then snapped up a string of iconic properties in other cities.

Some of the highlights: In 2006, it bought the master lease for Union Station in Washington, D.C. In 2011, it bought the leasehold for Boston’s Faneuil Hall Marketplace for $140 million. Two years later, in 2013, it added the $160 million purchase of the Apple Store building (along with another building) in San Francisco to its portfolio. And this August, it dropped $120 million on Boston’s South Station.

The firm also paid a massive $400 million in 2013 for the land beneath the 17 story office-and-retail building at 625 Madison Avenue, with plans for a ground-up tower — something it’s never done.

Sources who’ve had meetings at Ashkenazy’s office on the 39th floor of Vornado Realty Trust’s 150 East 58th Street said they’ve seen a rendering of a planned tower sitting on a cabinet in the main conference room. But plans for the property, which sits across the street from the GM Building and has 640,000 buildable square feet, are on hold until 2022, when rents at the building reset. Alpert told Crain’s in January that he believes the site is now worth at least $1.4 billion.

The hotel sector is another newish area for the company, which made its first buy — the 655-key Marriott East Side -— with a partner for $270 million two years ago.

JLL’s Davis, who represented the seller, Morgan Stanley, said while the duo had never owned a hotel, he approached them because of their long-term interest in “irreplaceable” assets.

“They saw it and signed the contract in under two weeks — it went hard,” he said.

In the past year, as New York’s hotel and retail markets have struggled, Ashkenazy has fielded offers to sell some of its prime real estate.

The firm hired brokers — from Cushman & Wakefield, JLL, HFF and Colliers International — to sell, to consider selling, or to review unsolicited offers for 522 Fifth Avenue’s retail, 690 Madison Avenue, the Marriott East Side and The Chrystie apartment building on the Lower East Side.

Those four assets alone are said to be worth over $1 billion. While none of them are in contract, sources say the firm is seriously considering selling a couple of them.

In New York, where it has 100 employees, it also has other irons in the fire.

At the roughly 27,000-square-foot retail condo at 522 Fifth, Ashkenazy and partner Deka wrapped a $16 million renovation this summer and are negotiating with retailers to take the space.

Industry players who’ve worked with Ashkenazy say he should not be underestimated.

“When we had a deal, we’d head straight to Ben’s office,” Mitnick said. “He’d get right to the point. We showed him a building we wanted to buy for $6 million in 2012. Ben looked at the numbers, called the broker immediately and offered $2 million. It closed in seven days.”

The Plaza, of course, is far hairier and more high-stakes than that 2012 deal was — and has a much greater potential upside. Whether Ashkenazy has a hand in shaping the hotel’s next chapter as its new owner or gets bought out entirely — a source said the firm would “evaluate” any good offer — is a topic many are now speculating on.

“The Plaza hotel will never sell fully on economics,” CBRE’s Burwell said. “It’s for someone who wants to own the best of anything.”

“The buyer of the Plaza may think, ‘I grew up reading “Eloise” and I need to own this hotel.’ I don’t know if anyone can really stop that person,” he said.