Back to Press Releases | Previous | Next
Download Article PDF
March 28, 2018 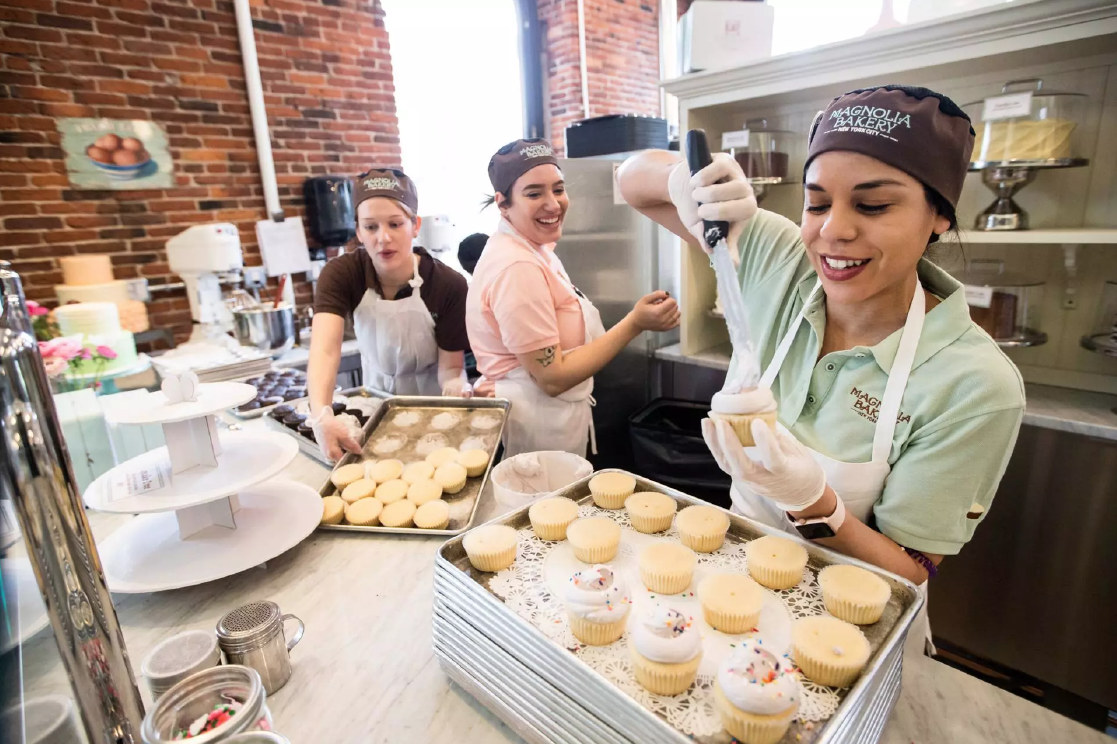 For Bobbie Lloyd, the grand opening of Magnolia Bakery in Faneuil Hall Marketplace Thursday marked something of a return to her Boston roots.

Production Manager Joelyn Vargas added frosting to cupcakes during the opening of Magnolia Bakery in Faneuil Hall. Aram Boghosian for The Boston Globe Long before she was a celebrity judge on TLC’s “Next Great Baker,” and before she lived in New York City, overseeing cupcake duties as Magnolia’s chief baking officer, she attended Boston’s Modern Gourmet Cooking School and later co-owned a restaurant in Brookline that featured classic American desserts.

Being back in Boston for the opening this week was nostalgic, to say the least.

And with that, Lloyd disappeared into the bustling crowds of people who packed together in a long line that stretched half the length of Quincy Market’s west end, orchestrating the store’s debut as samples of Boston Cream Pie Banana Pudding, a local twist on a company staple, were handed out.

Magnolia Bakery first opened in 1996 in New York City’s West Village. Four years later, it was prominently featured in Season 3 of the hit show “Sex and the City,” sending fans scrambling to the store’s front doors to get their hands on some homemade sweets.

Since then, it has remained a fixture of the cupcake craze, even during a time that feels like fancy doughnuts have taken center stage and cupcake shops locally have closed their doors.

If Thursday’s turnout was any indication, the company continues to attract a wide range of people — both first-timers and fervent fans — with a hankering for frosted goodies.

Many who came to sample and spend money at the Quincy Market bakery had snuck out of work for a few brief moments.

Justin Shaka, chief executive of a startup called Rebion, and co-worker Rachael Aldrich showed up 15 minutes before the shop opened its counter to raucous applause. They said they had never tried Magnolia Bakery before, so they didn’t mind the half-hour wait before stocking up on delectables.

“I see a carrot cake, I see a lemon,” said Aldrich, eyeing the array of cupcakes behind the glass case. “I’m getting them all.”

James Driscoll, 24, was there for the banana pudding. He had sampled it before, when a State Street colleague brought it up from New York City, so he knew what he wanted before staking his claim in the ever-growing queue.

Food blogger Olivia Yang knew what the bakery had to offer as if she were reading from its menu.

She said that as a native of New Jersey who didn’t live far from Magnolia’s New York locations, having a shop in Boston was like having a little piece of home nearby. “It’s kind of like a classic,” said Yang, 26. “When you think New York City, you think Magnolia Bakery.”

While some people stepped away from their day jobs to visit the bakery, others arrived with wide-eyed and eager children, as the smell of frosting wafted through the air.

Patty Kendall, a Beacon Hill resident, waited near the back of the line with her daughter Abigail, 3, and 8-month-old-son. When she told her daughter they were heading to Faneuil Hall to get cupcakes, Abigail sprinted to get her clothes on, she said.

“It was the fastest we have ever gotten out of the house,” Kendall said.