Back to Press Releases | Previous | Next
Download Article PDF
July 11, 2017

Celebrity-Favorite Sugar Factory Is About to Bust Guts in Bellevue 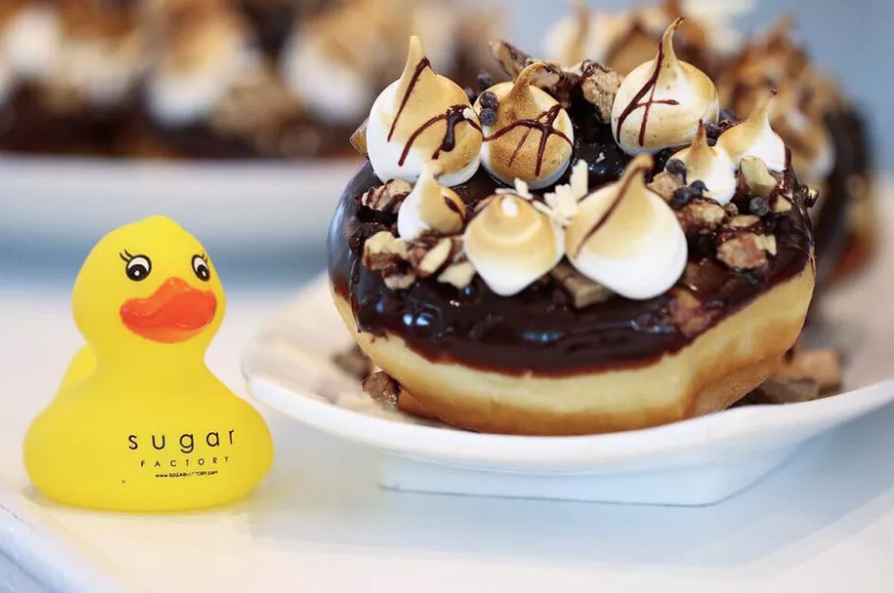 Over-the-top sweets chain Sugar Factory, approved by celebrities like Drake, Pitbull, and the Kardashians, opens its first Washington outpost at Bellevue’s Shops at the Bravern this summer, likely in August. The whopping 9,000-square-foot retail/restaurant combo seats 250, with a spectacular view of Bellevue, plenty of outdoor space, and even a chocolate lounge, a first in this format for the company.

For the most part, Sugar Factory Bellevue’s menu will be consistent with the insanity available at locations like Las Vegas, New York City, and Los Angeles. At retail, the business is known for its couture pops. At the bar, fruity cocktails practically glow in the dark and are served in goblets garnished with lollipops, while loose-definition martinis come in flavors like peanut butter cup.

On the food side, expect “monster burgers,” red velvet pancakes, and fried mac and cheese pops. And in case diners still want dessert, “insane milkshakes” are finished with pretzels, M&Ms, and cheeseburger sliders. The restaurant’s signature dessert is a $99 King Kong Sundae with 24 scoops of ice cream and sparklers on top. Yes, Backstreet Boy Nick Carter has taken a crack at it.

What sets the Bellevue restaurant apart is the 2,500-square-foot chocolate lounge that will serve doughnuts from pastry chef Max Santiago, who developed a cult following for his own outrageous creations at Miami’s Salty Donut. He left The Salty Donut in March and is helping The Sugar Factory open doughnut and coffee shops in New York, but the Bellevue expansion appears to be the first to combine all aspects under one roof. Boston cream, charcoal-maple-bacon-bourbon, and original cannoli are a few of the selections that will be in the display case.

"We're excited to be expanding on the West Coast. We're currently in Las Vegas and feel like Seattle was the next natural opening,” owner Charissa Davidovici tells Eater Seattle. “Bellevue is the perfect fit for our fun, family-friendly menu. We love welcoming bachelorettes, girl's nights, kids, families, celebrities — really everyone — to all of our locations. There is truly something for everyone, whether you're a foodie or a sweets fanatic. We can't wait to show the Bellevue community what we have to offer."

Sugar Factory says a celebrity, yet to be named, will be on hand to host the grand opening event in Bellevue — hopefully someone who can take down an entire King Kong Sundae for the entertainment of the crowd.