Back to Press Releases | Previous | Next
Download Article PDF
June 5, 2016 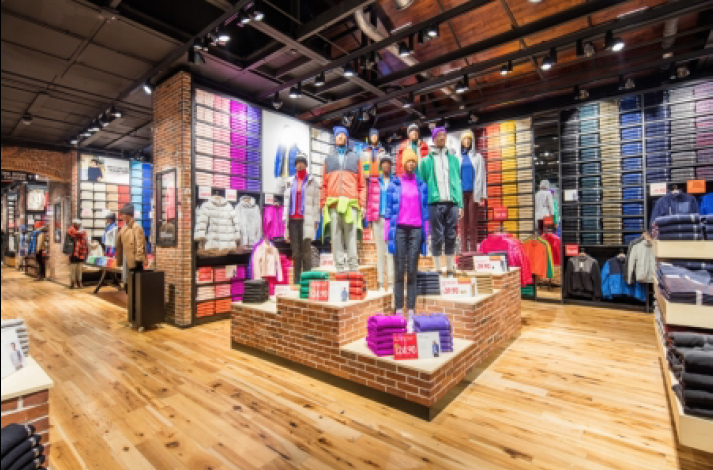 Boston’s historic Faneuil Hall, near the equally iconic Quincy Market building, was built before the U.S. established its independence from Britain. The two-story, cobblestone-surrounded hub – built in 1742 (Quincy Market was an expansion in 1896) to house merchants and meat and produce sellers – has seen its fair share of retail tenants come and go throughout the years.

“The Uniqlo store at Faneuil Hall holds a special place in the Uniqlo family as Boston is a sister city to Kyoto in Japan,” says Larry Meyer, ceo, Uniqlo USA. “The store [blends] rich traditions from both Boston and Kyoto alike, appealing specifically to college students, baseball fans and foodies through its design and decor.”

When the Yamaguchi, Japan-based apparel retailer opted to set up shop inside a particular space that has, at some point, been home to everything from a comedy club to a human body exhibition, the team at construction management firm Shawmut Design and Construction (Boston), in charge of bringing the 12,400-square-foot store to life, had its work cut out for it.

“We took it down to the bones,” says Greg Skalaski, director of retail at Shawmut Design and Construction. “We stripped everything out and had to do a lot of retrofit work.”

That extensive work included relocating exhaust systems that were snaking through the space from food shops on the lower level; preserving original elements such as exposed brick, granite piers and wood ceiling trusses; installing a winding staircase with steel supports; stabilizing the more than 100-year-old building’s foundation; adding new mechanical, electrical and plumbing systems; and creating a new storefront for access on the ground level, where there previously had been none.

Uniqlo is known for its clean and streamlined aesthetic, with stores that mostly dabble in bright, white drywall ceilings and walls. Rather than force that aesthetic onto a building dating back to U.S. colonial times, the retailer instead chose to make a few adjustments to its look, including incorporating darker hues, such as black-painted ceilings with exposed ductwork and mechanical elements, black metal fixtures and brick throughout.

“There was a challenge with that specific space in the past,” Skalaski says. “Every time it was used, there was a hard ceiling and [walls were] covered up. You’re in a historic market – why would you want [it] to feel like you’re walking into a mall?”

The added first-floor storefront, about 700 square feet, is a slice of a space with a handful of merchandise and a newly installed granite staircase spiraling toward the second floor, where the bulk of Uniqlo’s women’s and men’s sweaters, tees, tanks and other apparel live. The staircase wraps around a glass tube in which four mannequins float up and down via a cable system – a quirky feature that the retailer has installed in several of its other flagships, including its store on New York’s Fifth Avenue.

“The visual movement draws your eye and helps draw people up the stairs,” Skalaski says. “One of the biggest challenges for any retailer on a second level is getting people to go up the stairs, and [Uniqlo] found a unique way of doing that.”

Despite a few modifications to its usual aesthetic, Skalaski acknowledges that there’s no confusion whether you’re in a Uniqlo store. This location celebrates its architectural roots.

“When you get into the main area, the first thing you feel is that large volume,” he says. “Here [the ceiling] goes up to a pitched roof, and you can see the ductwork and the mechanical. That opens the volume up so it seems grander, and we want the consumer to feel like [she’s] walking into this really great-feeling space that speaks to the feel of old Boston.”

In an effort to introduce the international brand to this historic U.S. city, the Faneuil Hall store has partnered with the Red Sox Foundation to host back-to-school shopping events, as well as activities for Boston-area college students, to promote the flagship’s opening.

“Uniqlo is founded on the concept that local is global, and global is local,” says Meyer. “By immersing ourselves in the community through our very localized advertising campaign, our partnership with the Red Sox Foundation, store design details and college campus integration, we hope to connect with the people who make Boston, Boston.”